Book review: Through My Eyes: Malini

Published by Allen & Unwin – Through My Eyes series.

Set in Sri Lanka during the recent civil war, this novel is a powerful portrayal of how a war can seriously impact the daily lives of so many innocent people, and especially children. The action begins from page one when Malini and her younger sister Banni are thrust into the conflict one morning at dawn. The Tamil soldiers come to their village in northern Sri Lanka and force everyone out of their homes at gun point.

Terrified, and not knowing what it is all about, their family is on a forced march towards the coast where they will be used as human shields against the army. Their quick thinking father helps them to escape into the nearby forest, after thrusting a mobile phone into Malini’s hand. The two sisters successfully escape detection, but that is just the beginning of their troubles. Malini is unwillingly forced into the role of a parent, and when they “adopt” another group of vagrant children, all orphans, her troubles just multiply. Not only does she need to care for her growing “family”, she has to avoid the numerous patrols, find shelter for them to sleep, and feed them. The task is almost too much.

This story quickly becomes not only a story of survival against terrifying odds, it is a journey across the country in quest of her grandfather’s village where she hopes they will find refuge. Skilfully written, tense and with a great awareness of the culture, geography and people of Sri Lanka, the author has written a masterful novel, both fast moving and adventurous.

This is the sixth title I have read in the series Through My Eyes, a series dealing with the experiences of children in conflict zones. The dedicated website for the series includes teachers’ notes, author interviews and more. See the links below. I have also included links to other reviews I have written of books in this series. 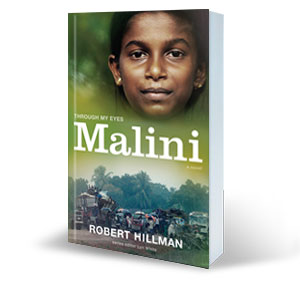