Archive for the 'Poetry' Category

A Resting Place for Poets 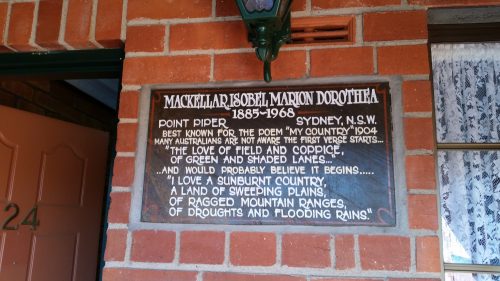 On a recent trip to Sydney, we stayed one night in the Poet’s Recall Motel in Gundagai. In the past, we have taken only two days to travel from home – Murray Bridge near Adelaide – to our son’s home in Sydney. Due to doctor’s appointments on the day we had planned to leave, we decided to take a more leisurely two and a half days to get to our destination.

On the second night, we had planned to stay in a cabin in the local caravan park in Gundagai. We usually prefer to stay in a cabin because the cooking facilities are generally better in cabins. Of course, I should have booked ahead.

When we arrived at the caravan park, they had no cabins left vacant. The lady in the office told me that rooms were in short supply in the town, and she gave me a few possibilities to try. A few hundred metres away was the Poet’s Recall Motel; what a charming name for a motel. I loved the idea of staying in a motel which acknowledged the role of poetry in our Australian culture.

We managed to get one of the few rooms left that night. It was cosy (read “smallish”) but quite adequate for our needs. Comfortable and clean. On the downside, I had to lug our gear up some stairs, but we only had an overnight bag and a few other items, so I managed okay.

One of the first things I noticed was a plaque on the wall outside our room. Later I noticed that every room had one. Each plaque was a tribute to an Australian poet of note. I have featured two of these plaques above and below. The top one features our well-known poet, Dorothea Mackellar, and the one below Mary Gilmore. I particularly love the quote from Gilmore’s poem.

The Dog on the Tucker Box

Many Australians are familiar with the story of the Dog on the Tuckerbox, made famous in another poem. The tribute to this famous story and poem is featured a few kilometres north of the town of Gundagai. I wrote about several of our visits in posts on my travel blog, Trevor’s Travels. You can read those posts by clicking on the links below. I took the photo above a few years ago on a wonderful tour of magical Morocco. My wife, daughter and I spent two very interesting weeks on a guided tour by mini-bus visiting some of the highlights of Morocco. We visited ancient Roman ruins and modern mosques, the sands of the Sahara desert and the frenetic market places in the exotic cities of Fez, Rabat and Marrakech.

One quiet rural town we stayed in was Midelt where we were taken on a walking tour of some of the local farms. While on this walk I spied this local woman at a water source. I am not sure what she is doing with the pot in her hand. It is at that point I want your imagination to kick into gear.

Here are some suggestions to get you going: Earlier this week I visited the Laratinga Wetlands on the outskirts of Mt Barker in the Adelaide Hills of South Australia. These wetlands are frequently visited by birders like myself because the ponds often teem with birds. I write about my birding experiences and show photos of Australian birds on my site called Trevor’s Birding.

Many people visit the wetlands every day, including walkers, joggers, runners, cyclists and picnickers.

On this occasion it was early on a frosty morning and the water was still quite smooth. The photo above shows this well. This scene – or another similar which you have experienced – could well be an interesting prompt for your writing.

Here are some writing suggestions:

Writing prompt: Storks on the roof A few years ago my  wife, daughter and I travelled through magical Morocco. It was an amazing experience which assaulted the senses in every way. I still look back with amazement at my photos which beautifully encapsulate some of the sensory experiences of that trip.

I also took more than a passing interest in the wildlife, the birds in particular. I write about Australian birds here. In many places we saw plenty of White Storks, shown in the photos above and below. They are amazing birds, and their nests on chimney stacks and on roofs are enormous. They make quite a picture against the sky.

The photos I have included were taken in the village of Ifrane, one of Morocco’s main skiing resorts. That’s snow skiing, by the way. Not many people I know realise that Morocco has extensive snow fields in the Atlas Mountains. The village felt as though we had stepped right into the Swiss Alps, complete with ubiquitous chalets (see last photo). White Storks on nests in Morocco How to submit your writing to literary journals

Over the last three decades or so I have submitted hundreds of pieces of my writing to a variety of publications and competitions. A reasonably healthy percentage of these have been published or performed. My list of writings have included:

Writing published on my blog sites

In addition to the above figures I have self-published over the last 10 years more than 4000 articles combined here on this writing site, and on my other sites, Trevor’s Birding and Trevor’s Travels and on our church website where I am the webmaster.

That’s a heap of words. And I have many, many more waiting to be sent off to various publications, and heaps more ideas for more stories, novels, poems and articles. Finding a balance between creating new writing and submitting one’s writing is always a fine line to walk.

I must admit that I err too much on the side of not sending out my writing to places where it stands a good chance of being published.

It is worth taking a look at; while you are gone I think I will prepare a few submissions of my own. After all, I’ve had a list of them ready for a week now.

You are currently browsing the archives for the Poetry category.