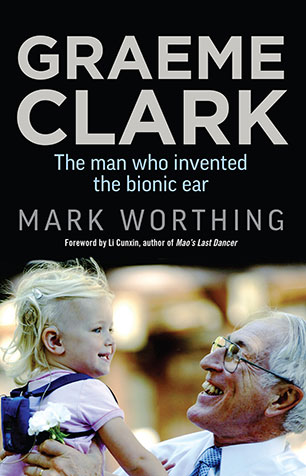 Graeme Clark grew up with a powerful and compelling vision.

He wanted to develop some way of helping his father regain his hearing. In a simple way this encapsulates the driving force behind why he became a doctor, surgeon, and later an inventor. Along the way he developed many other skills necessary for his dream to be realised. The road to success was, at times, a very bumpy one. One of the many skills Clark had to learn was fund-raising to support the development of the bionic ear. Bizarre – yes – but often that is the way with visionary people; nothing can stop them, even if the road takes some unexpected twists.

Worthing has resisted the temptation to dwell primarily on the technical side of the development of the bionic ear. Sure, there is enough scientific detail for readers who would like to know. Instead, the author has let his focus be on the man himself, what motivated him and the role of Clark’s Christian beliefs and values in the whole process. This comes through very strongly throughout the book. The author has successfully portrayed an ordinary Australian man, with a uncomplicated values but with an extraordinary vision driving him.

Probably the one thing that most impressed me about the portrayal of Clark the man was his uncomplicated reliance on prayer. Whenever the going got tough, whenever obstacles faced him, whenever he was perplexed, and whenever he faced criticism or outright opposition, Clark prayed. The development of the bionic ear was technically, electronically and medically very complex. Clark’s almost child-like faith in God and his simple, uncomplicated prayers carried him forward.

Now hundreds of thousands of profoundly deaf people all over the world are thankful to this man.

It is a truly inspirational book and highly recommended.

I had the privilege of reading early drafts of this work. This came about through my involvement in a writers’ group run by the author. Dr Mark Worthing was one of my lecturers and mentors at Tabor Adelaide when I was completing my Master of Arts Creative Writing. Later we became friends and lecturing colleagues at Tabor.

You can read more reviews I have written here.