My review of Bird Therapy

I recently came across a new book about birding which I quickly bought and read through over just a few days. Joe Harkness, a teacher who lives in England, struggled with mental health. This was until he took up birding more seriously. His book, simply called Bird Therapy, describes his journey from illness, including depression, to better health.

I won’t go into more detail here except to link you to my review on my birding site here.

If you want to read more about this project, I encourage you to check out the Bird Therapy Blog written by the author, Joe Harkness.

Review: The dangerous world of butterflies

The dangerous world of butterflies: the startling subculture of criminals, collectors and conservationists written by Peter Laufer, PhD.

This is a book I probably would have glanced at in a bookshop – and not taken much interest in it. My copy came into my possession via my wife who bought it for me for Christmas. The title and subject matter intrigued her and she took a gamble, hoping I would enjoy it.

Her gamble paid off; at times I could hardly put it down. The author, Peter Laufer, a journalist of note, had tired of writing about serious, world shattering events and theatres of war, and jokingly said at a book launch that his next book would be “about butterflies and flowers.” The idea stuck with him, but he didn’t realise how life changing that throw-away line would prove to be.

The more he delved into the world of butterflies, the more he became intrigued, fascinated and amazed. The book is written about three main aspects of butterflies: crime, collecting, and conservation. Rare and beautiful butterflies are much sought after and there is a thriving black market for the most sought after. Collectors will go to extraordinary lengths – usually illegal – to add to their hoard of specimens mounted on card with a pin. Conservationists, however, try desperately to protect the last few surviving beauties. It is a dangerous world indeed, not the least for the poor insects themselves struggling to exist in an increasingly hazardous world.

Laufer deals also with valiant attempts to breed endangered species, detailing the amazing life cycle of these beautiful, delicate miracles of nature. Large breeding centres also sell large quantities of more common species for release at weddings and other ceremonies. I’d never heard of this “use” of butterflies but the idea appeals to me. Apparently you can buy butterflies for this purpose here in Australia, though it remains mostly an American custom.

I had a good laugh

Last Wednesday my wife and I had the joy of seeing a preview of the soon to be released movie The best exotic marigold hotel starring Judi Dench, Maggie Smith, Bill Nighy and several other wonderful actors. My wife won the tickets through and offer made by the Seniors Card people here in South Australia.

We both thoroughly enjoyed the movie and will eventually buy the DVD as it is such a delightful romp with many hilarious lines and incidents. Unknown to each other a group of ageing English people respond to glossy advertising placed by the young manager of a run down hotel in India. Unable to afford their current housing, or seeking adventure, each in the group sets out to take up residence in the hotel. Through many misunderstandings, misadventures, comical situations and a touch of pathos, the group is thrown together in an unlikely situation and help one another to survive – or not.

I haven’t laughed out loud like this for some time. In fact, the whole audience – the theatre was full – enjoyed it so much that I occasionally missed some of the wonderful dialogue. Mind you, the average age of the audience was well over 60; you have to be 60 to qualify for a seniors card. The script was certainly written with seniors in mind – but younger generations will also get a good laugh at this, if only out of fear of what might happen to them in a decade or two.

I am a great admirer of the acting of both Judi Dench and Maggie Smith but this movie shows how both of them are ageing quickly. May they continue to delight audiences for many years to come – even if those movies send up the elderly in hilarious ways like this wonderful film.

Review: Field guide to the birds of Colombia

As regular readers woud know I do regular reviews of books here on my writing site. Every writer should be an avid reader, and I enjoy sharing what I am reading with regular visitors to this site.

This time the review is a little different. Normally I would review books about writing, novels I’ve read or volumes of poetry. I have also reviewed children’s books, including picture books on occasions. (Click here to read more of my reviews.)

This review focusses on a Field Guide to the Birds of Colombia. As my long term readers would know, I also write articles about and post photos of Australian Birds on Trevor’s Birding site. I’m not going to write a new review of this book here. If you are interested in reading this review, click here.

This book was given as a special gift to a close family member who has close connections with Colombia. One day I hope to get to that fascinating country and do some birding. Of all the countries in the world, Colombia has more bird species than any other, with nearly 1800 different kinds. By way of comparison, Australia has about 800 different birds.

Book review: A Promise of Peaches by Valerie Volk 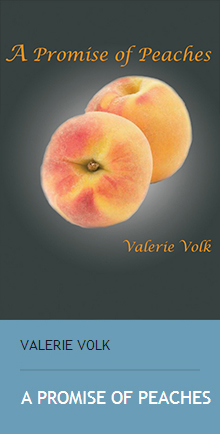 My review of ‘A Promise of Peaches’

A review of A Promise of Peaches by Valerie Volk

Published in 2011 by Ginninderra Press.

A Promise of Peaches is Valerie Volk’s second book of poetry. I wrote a review of  her first book, In Due Season a few days ago. Actually, to call this new work a book of poetry is to do this volume a disservice. It is a verse novel.

The inspiration for this novel came from Valerie’s own experience as a child, but I hasten to add that it is in no way autobiographical. It first existed as a short story. I remember when Valerie read this story which was an assignment when we were part way through our Master of Arts degree. The suggestion was to expand it into a novel. A little later I recall that our lecturer suggesting that she rewrite it as a verse novel. I think at the time Valerie claimed not to have ever read anything in this specialised genre before, but typically, Valerie threw herself into research mode and the idea grew into the book.

A Promise of Peaches traces the life of Claire, from her early memories as a young girl growing up in post-war Melbourne through to her frustrations in an aged-care facility. Her parents take in as boarders a Czech refugee couple, Viktor and Irena. The story, told in a variety of poetic forms, reveals the feelings and thoughts of each character. Each poem is short, often no more than a page or two at most, and every one sketches a poignant vignette of the inner feelings of the character. Valerie has used different, distinctive voices for each person, a difficult task for any writer and one she succeeds in achieving.

The initial excitement of the struggling post-war Australian suburban family in welcoming a couple from a totally different culture and social background is soon swamped by misunderstandings, rising tension and frustrated passions. Claire’s own innocent sexual stirrings, aided by Viktor, add to the tension and conflict. The author has skilfully woven all of these emotions into the beautiful fabric of her narrative. Her poems are often sparse, tight and understated, sharpened down to bare essentials. I particularly like the three special blues poems inserted into the text late in the writing process.

In the very next poem we read how Claire sees Viktor only once many years later. She recognises him instantly, but he doesn’t know her, nor the profound effect his actions have had on her throughout her life.

I highly recommend this verse novel, not because Valerie is a valued colleague and friend, but because it is a captivating read. Many readers have told her that they couldn’t put it down, that they read all the way through in one sitting. Even though I’d read the manuscript in several of its draft forms, I too found myself reading right through (though I admit to stopping for lunch at one stage, only because it was my turn to cook).

By the way – it’s not every day one gets to read one’s name in the acknowledgements page of a novel. Thanks for sharing the journey with me Valerie; it was fascinating.

You can buy this, and her other books online on her website: Valerie Volk